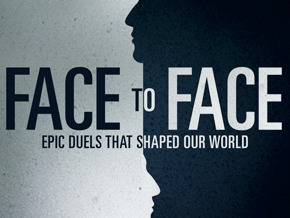 Face to Face is a series of comparative portraits featuring two well-known figures, seen through the prism of their rivalry. Adversaries, opponents, the best or worst of enemies… they have all been groundbreaking leaders in their fields : politics, science, technology, economy or the arts.

For each of them, their rivalry became a driving-force and a constant challenge. The scale and scope of their contention went far beyond mere personal antagonism, and the results of their confrontation have often changed society and deeply impacted our lives.

Through complementary and contrasting profiles, the complexity and ambiguity of their coexistence on the public stage is clearly highlighted and expounded through the battles for power and influence, the low blows and the moments of glory, the seduction and winning-over of an audience, the formation of clans, the claims and allegiances of their heirs, devotees and disciples.

The series examines:
• How the rivalry started?
• What were the causes?
• Was it real or cunningly orchestrated?
• To what extent did truces, treachery, jealousy or injury play a part?
• What were the repercussions, either positive or negative?

Above all this series looks at the ingenuity and creativity that these rivals brought to the table.

Episodes:
01. Chanel vs Schiaparelli: The Black and the Pink  02. Jobs vs Gates: The Hippie and the Nerd  03. Korolev vs Von Braun: The Space Race  04. Mandela vs De Klerk: Enemies for Peace  05. Pepsi vs Coca: The Battle of the Century  06. Dassler vs Dassler: Puma Against Adidas  07. Rubinstein vs Arden: Powders of War  08. Visconti vs Fellini: Italian Standoff  09. Lagerfeld vs Saint Laurent: The Reason & the Passion