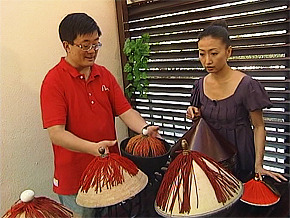 In this episode, Melissa Hyak meets with personalities with the gift of the gab! She takes part in a cooking-cum-debate competition, against some of the best Chinese debaters in the land - in Mandarin of course.

Next, she attempts to stay focused during a table-tennis showdown, while slugging it out at a Chinese word game at the same time.

Melissa also meets the former president of the Kowloon Club, himself a well-know lawyer with an interest in collecting traditional “guan mao” – or officials’ headgear.