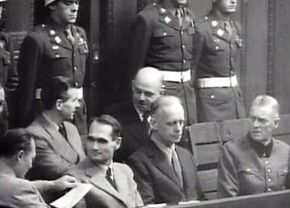 Nuremberg: the Nazis Facing their Crimes

Nuremberg, November 20, 1945 – In a city still in ruins, almost 6 months after the defeat of Nazi Germany, the first court for crimes against humanity opened under the auspices of United States, France, Great Britain and the Soviet Union.

Narrated by Christopher Plummer, these riveting archives bear witness to the birth of International Justice. See the trial from inside, as no one before.

''An excellent addition to the wealth of audiovisual material on World War II and its aftermath, this powerful film is highly recommended'' Video Librarian