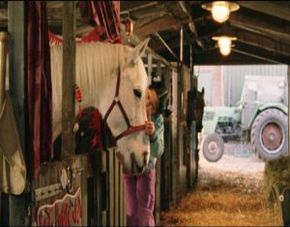 Winky Wong, who is 6 years old, has emigrated from China with her mother to be near her father, who runs a restaurant in a seaside town in Holland. The language difference creates a barrier to her making friends but things improve when she becomes very attached to Sara, an old pony kept at a local stable owned by Aunt Cor and Uncle Siem. Despite her parents warning about the dangers of riding, the pony means everything to Winky and she takes all opportunities to spend time with it.

When this pony dies of old age, there is only one thing Winky wants: a new horse. But that seems to be a dream which will never come true until she learns about Sinterklaas, a typical Dutch phenomenon on December 5th, comparable with Santa Claus in the Anglo-Saxon world. Winky’s parents think Sinterklaas doesn’t exist and they are certain that Sinterklaas will never give her a horse. She decides not to bother with her parents. They don’t know anything about Holland anyway!

Winky is disappointed when she receives a toy from Sinterklaas at school. Outside she sees a real white horse tied to her bike, Winky rides the horse to her house. Is it a present for Winky? It appears to be a misunderstanding, but at Auntie Cor’s house, Winky gets the best present ever! The results are comical and touching. A film for all ages!

Also available:
Where Is Winky's Horse?