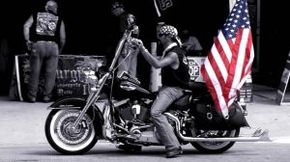 Hell's Angels Against Bandidos - the Merciless Law of the Bikers

Hell’s Angels or Bandidos? Although both are easily recognizable by their black jackets, these biker gangs are by far the most violent, secretive and organized in the world. They are also rivals fighting to hold their territories.

These biker gangs are a strange brew: their clubs are legal, but more than half of their members have trouble with the law. Police worldwide see them as drug and arms dealers, pimps, henchmen. They define themselves as a simple motorcycle club, whose values are directly inspired by the veterans of the American army: solidarity, fidelity, and even love. In fact they are brothers in arms, a parallel society, formed by misfits who choose to create a community that lives by its own rules.

The film takes us to Sturgis, Dakota, where 700,000 Harley Davidsons and their riders meet up each year during a spectacular gathering. In France, we meet the Bandidos at the French branch of their club and we follow them to Germany, where they are on trial against the Hell’s Angels, after both gangs were involved in a rival war. In Denmark, Copenhagen, a gang war for the control of the drug market has plunged the city into violence, barely contained by the police.

In ten years, at a global level, the Bandidos have superseded the Hell’s Angels, opening more than fifty clubs in Europe. For the first time, they agreed to open their doors to our cameras. Journey into the heart of a biker gang.

Hell's Angels Against Bandidos - the Merciless Law of the Bikers