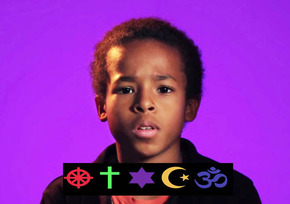 Let’s Talk About Religion is a series for children ages 7 to 11 that helps them discover the roots of five of the most important religions in the world in an educational and entertaining manner.  Whether or not we are believers, religion is everywhere and is a very important part of our human culture. 84% of the world population adheres to a religion.

Each episode from Let’s Talk About Religion focuses on one religion, describing its roots, rites and values, highlighting differences and similarities with other religions.