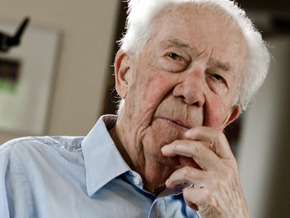 NOBEL FACE - CHRISTIAN DE DUVE, is an intimate look at the life and work of  the 1974 winner of the Nobel Prize in Medicine and founder of the De Duve Institute, by his granddaughter Aurélie Wijnants, the film’s director.

Wijnants introduces us to the figure of her grandfather with tenderness and humanity. A balance between the intimate and the universal, both life story and a broader look at the world. The film follows his research career, his quest to create the Institute and his development as an author.

Through this great mind of the 20th century and his take on issues at the heart of our concerns today, the film gives us new perspectives and food for thought on some fundamental topics: religion, conflicts, the fate of the planet and the future of mankind.