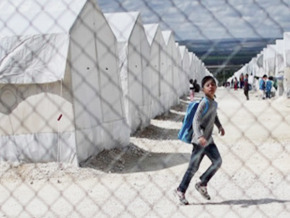 For the vast majority of us, refugee camps respond to the needs of an emergency situation and yet the reality of such camps is very different. Their multiplication around the world is a clear demonstration that a situation regarded as “exceptional” is in fact, a system that is durable, lucrative and long-term. It is a veritable market, in which state nations, international organisations and investors all stand to gain.

Around the world, 12 million people live in refugee camps, more than 60 million pass through one camp or another. In various forms, camps are now commonplace pretty much everywhere.

Who sets them up? With what legitimacy? Who do they benefit? Why are camps proliferating and why do they endure? Do they provide the only solution for a migratory policy?

Through a close-up investigation of this invisible world, this documentary takes a new look at contemporary migration. The film reveals the mechanisms behind a major phenomenon, “the encampment of the world”.

Refugees, A Market Under Influence