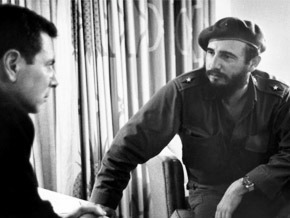 With Castro at the TIme of the Crime, 1963 Newly Added

Castro saw in Kennedy the only president who believed in coexistence between socialists and capitalists. Yet, we know of the complex relationship the revolutionary had with the United States, crystallised in Cuba by the nationalisation of its commercial interests, which triggered the American embargo and invasion of the Bay of Pigs, the first American military defeat.

This documentary aims to establish the links between the past and present through images of Cuba frozen in its eternal embargo, and look back at Cuban-American history from 1963 to the present day, through the vision of a journalist who would go on to become a renowned reporter. In Trump’s America, are there voices that follow Jean Daniel’s path in the direction of this much-awaited reconciliation?