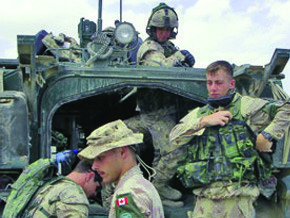 Wounds of war in times of peace. Since 1990, Canadian Armed Forces have been deployed as peacekeepers in war zones around the world: the Persian Gulf, Rwanda, Bosnia, Afghanistan. Some lose their lives, others their souls.

Post-traumatic stress disorder is the common complaint of 15-20% of soldiers who fail their ultimate assignment, Crash Landing.

Even isolated in the most idyllic of pastoral retreats, their days and nights unfold to the rhythm of inner chaos and they remain haunted by the horrors they have experienced.

Terror lurks everywhere; living is no longer possible. An intense suffering that neither time nor drugs can ever completely assuage. A wound to the soul aggravated by lack of support either from the Army or the government.

Through the poignant testimonies of a few men and one woman ''released'' for health reasons, Crash Landing sheds light on this still taboo subject.

The daily hell of these ravaged beings reveals the true face of war and its deadly power of destruction. A film of great sensitivity that questions the State and all of humanity.

French and English versions on 1 DVD.