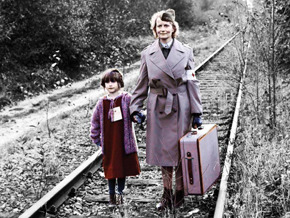 Kees Vanderheyden, now a children's author living in Quebec, tells a class of school children his story about the brutal German occupation of Holland in World War II that he lived through and how his mother took in a skinny little girl from Austria named Traudi Berndl as part of and inspiring project organized by visionary individuals in the Red Cross.

180 000 traumatized children travelled by train from Germany, Austria and Hungary to stay with families in Western Europe. 60 years later, Kees, began a search for the little girl who had so memorably marked his youth. It took him 5 years to find Traudi.

The film gives place to the children to express their emotional reactions to Kees touching story.

Book by author for young readers: WAR AND PEACE IN MY BACKYARD