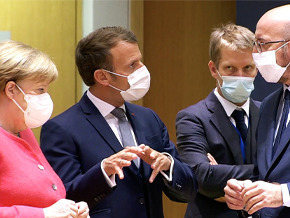 When the virus struck Europe in March 2020, everyone watched as masks were confiscated on airport tarmacs, borders were closed without dialogue and a lack of mutual aid between European member nations forced Italy to rely on Chinese aid. Like this health crisis, the negotiation of a European recovery fund to deal with the economic consequences of the virus would be hit hard. The struggling Southern European countries dramatically impacted by the virus butt heads with the so-called "Frugal Four" of the North provoking insults and alliances. The twist comes when Germany reverses its decision to save Europe and accepts the principle of shared responsibility for some of the debts. But Dutch Prime Minister Mark Rutte throws the recovery fund negotiations into an impasse as he becomes the "Mister No, No, No " of Europe. After 3 months of virtual discussions, the twenty-seven meet in Brussels to begin a 92-hour power struggle over the amount of the recovery plan leading ultimately to a historic agreement described as a "Hamiltonian moment".